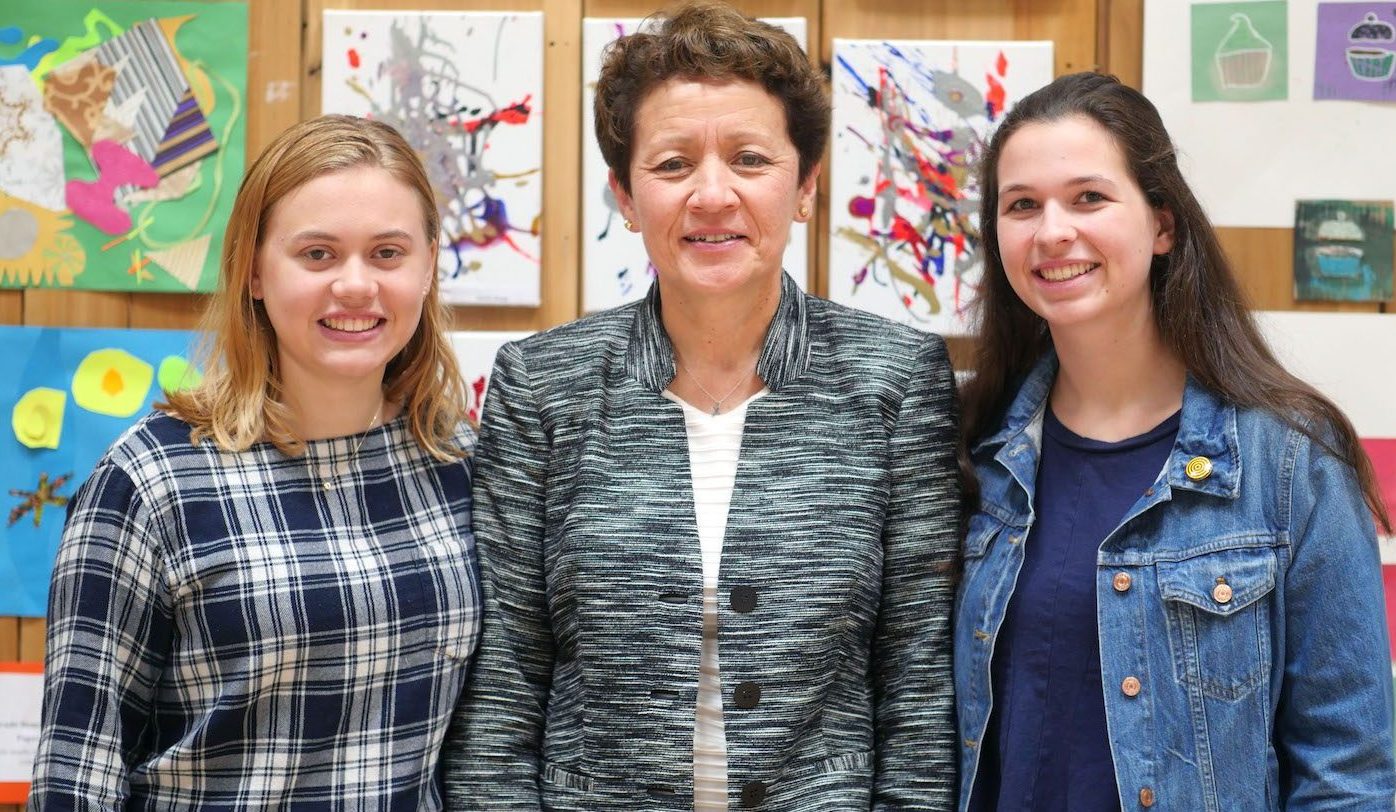 Willow’s emphasis on virtues and ethics serves as a moral foundation for students throughout their lives. Just ask Willow alumna Megan Traudt! On May 16, Megan returned to The Willow School after winning the National High School Ethics Bowl with her Kent Place Ethics Bowl team. Dr. Karen Rezach, the Director of The Ethics Institute at Kent Place School, Megan, and her teammate Olivia Zeiner-Morrish spoke to Willow middle school and fifth grade students about the ethics competition, relating it to Willow’s virtues program.

At The National High School Ethics Bowl, students discuss and take a stand on real-life ethical issues. Students are rewarded for the depth of their thought and the respect they show to the diverse perspectives of their peers. In each round of competition, teams take turns analyzing complex ethical dilemmas. Each team was given 16 identical case studies in advance to prepare for and research.

As Megan and Olivia explained, their team started dissecting each case study by first determining which values they hold and how they relate to the issue at hand. Megan said that she was immediately reminded of Willow’s virtues program.

“Virtues or values were both implicitly and explicitly taught during my time at Willow,” Megan said. “The values that Willow taught me are the ones that I brought to this competition. Willow taught me to think deeply about virtues and my values.”

Megan and Olivia gave an example of one of the ethical dilemmas they discussed to Willow students, asking them to consider: Is heckling unethical? Willow students discussed the sometimes gray area between joking or participating as an audience member and being cruel. They discussed whether it made a difference if the heckler was singling out one person versus trash-talking a team, and if age and professionalism matter. Meaning, is it okay to heckle a professional sports player, but unethical for parents of an opposing team to heckle a child player?

Students spoke about respect and compassion as Willow virtues that applied to this issue. Megan and Olivia agreed. One of the values that Megan’s team considered in their assessment of this issue was respect, a virtue that Megan remembers from her time at Willow. “Respect and responsibility–that was the theme every January,” she said.

Olivia also introduced the ethical theory of consequentialism, where instead of looking solely at whether the act itself is ethical or unethical, you also consider the broad impact of that action. As parents and Willow teachers in the audience pointed out, this ties directly to Willow’s emphasis on systems thinking, where students focus on the unintended consequences of actions past and present. For example, fifth graders are currently studying the agricultural revolution, learning about the unintended consequences of the revolution, and imagining ways in which those negative effects could have been avoided.

Thank you to Dr. Rezach, Olivia, and Megan for speaking with our middle school and fifth grade students! We hope to see more of our students participate in the Ethics Bowl in coming years!