What to Read This Summer: Books for Every Age 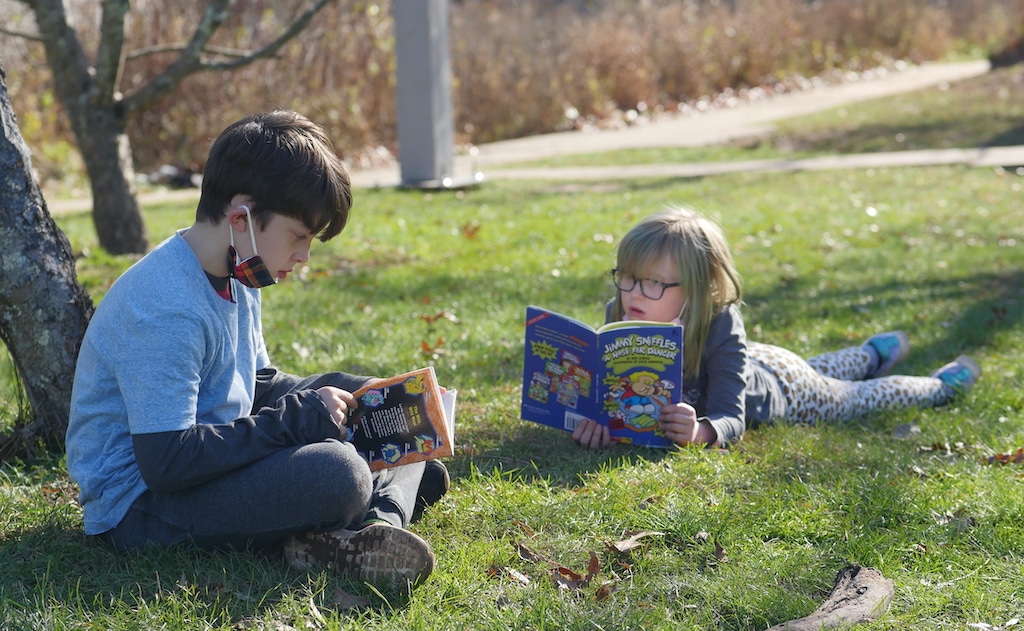 Summer is an ideal time to play outside, explore your child’s passions, enjoy time with friends and family, and get lost in books! But what should you read this summer? We are pleased to share our 2021 Willow Summer Recommended Reading List for all students, preschool to eighth grade!

Use this list of recommendations from our teachers and students to find that just-right book for your children. These titles are grouped by age range and genre. Some titles can be read independently; others are more challenging and can be read aloud as a family. While this is a list of our favorite titles, there are so many others to explore. We recommend the Imagination Soup summer reading list and the books that won this year’s Newbery, Caldecott, and Coretta Scott King Book Awards. The most important message is to keep books alive over the summer months!

If you like Silly books, you’ll love books by:

Let’s Go for a Drive!
We Are in a Book!
Let’s Say Hi to Friends Who Fly!

My Toothbrush is Missing
What is Chasing Duck?
The Doghouse
AND MORE

If you are looking for books that help with Phonics:

If you are looking for Fun, Easy Readers:

If you are looking for Informative Books:

If you are looking for books that help with Phonics:
Pig Wig: Flip a Word books
I Can Read -Tug the Pup books
Curious George Math and Science Readers
Bob Books
Fox on a Box by Phil Roxbee Cox

If you are looking for Fun, Easy Readers:
In, Over and On the Farm by Ethan Long
Baseball Buzz by CC Joven
Tiny Goes Back to School by Cari Meister
Big Dog and Little Dog Wearing Sweaters by Dav Pilkey
Little Big Horse Where’s My Bike by Dave Horowitz
Let’s Say Hi to Friends Who Fly by Mo Willems
Let’s Go for a Drive by Mo Willems
We Are in a Book by Mo Willems
Pug by Ethan Long
Baby Monkey, Private Eye by Brian Selznick
Gran on a Fan by Kevin Bolger
We are Growing by Laurie Keller
Big Cat by Ethan Long
My Toothbrush is Missing by Jan Thomas
Lazy Bear, Crazy Bear by Kevin Bolger
Sip Pip Point by David Milgrim

If you like Funny books, you’ll love:
Ice Cream Soup by Ann Ingalls
The Doghouse by Jan Thomas
Meet Mo and Jo: The Boulder Brothers by Sarah Lynn
Pinch and Dash and the Terrible Couch by Michael J. Daley
The Bad Guys by Aaron Blabey
Bad Kitty by Nick Bruel
Bird and Squirrel on Ice by James Burks
Stinkbomb and Ketchup-Face and the Badness of Badgers by John Dougherty
Mercy Watson by Kate DiCamillo
Biscuit (Series) by Alyssa Satin Capucilli

If you like Adventure stories, you’ll love:
Zita the Spacegirl by Ben Hatke
Magic Tree House by Mary Pope Osborne
Galaxy Zack by Ray O’Ryan
The Notebook of Doom by Troy Cummings
Ricky Ricotta’s Mighty Robot by Dav Pilkey
Rescue on the Oregon Trail by Kate Messner
I Survived series by Lauren Tarshis
Danny and the Dinosaur by Sid Hoff

If you love Realistic stories, you’ll like:
Biscuit by Alyssa Satin Capucilli
The Quiet Boat Ride and Other Stories (Fox and Chick) by Sergio Ruzzier
Amelia Bedelia Means Business by Herman Parish
Henry and Mudge: the Book of Their First Adventures (series) by Cynthia Rylant
Pug Pals: Two’s a Crowd by Flora Ahn
Stink by Megan McDonald
Ivy and Bean by Annie Barrows
Lulu and the Rabbit Next Door by Hilary McKay
Daisy Dawson Is On Her Way by Steve Voake
Lola Levine Is Not Mean by Monica Brown
Gooney Bird Greene by Lois Lowry

If you like Fantasy stories, you’ll love:
The Dragonsitter by Josh Lacey
Of Giants and Ice by Shelby Bach
Whatever After series by Sarah Mlynowski
Pip Bartlett’s Guide to Magical Creatures by Jackson Pearce and Maggie Stiefvater
The Misadventures of Salem Hyde Spelling Trouble by Frank Cammuso
Door to the Lost by Jaleigh Johnson
Amulet series by Kazu Kibuishi
The Land of Stories by Chris Colfer
Harry Potter by J. K. Rowling
The Wild Robot by Peter Brown

If you like Adventure and Mystery stories, you’ll love:
The Great Shelby Holmes by Elizabeth Eulberg
Secret Agent Jack Stalwart by Elizabeth Singer Hunt
Diary of a Minecraft Zombie Book 1: A Scare of a Dare by Herobrine Books
Zoo Camp Puzzle by Gail Herman
Star Scouts by Mike Lawrence
Belly Up by Stuart Gibbs
The Last Kids on Earth by Max Brallier
Jada Sly, Artist & Spy by Sherri Winston

If you like Historical Fiction, you’ll love:
Escape from Mr. Lemoncello’s Library by Chris Grabenstein
The Kicks by Alex Morgan
The Year of… by Andrea Cheng
Ellie, Engineer by Jackson Pearce
Wishtree by Katherine Applegate
Click by Kayla Miller
Hero by Jennifer Li Shotz
I Survived series by Lauren Tarshis
John Lincoln Clem, Civil War Drummer Boy: Based on a True Story by E.F. Abbott
Lifeboat 12 by Susan Hood

If you love Animal Books, you’ll like:
Jenny and the Cat Club by Esther Averill
The Critter Club by Callie Barkley and Marsha Riti
Strongheart: Wonder Dog of the Silver Screen by Candace Fleming
Dolphin Rescue (Animal Planet Adventures #1) by Catherine Nichols
The Rescue Princesses by Paula Harrison
Puppy Place by Ellen Miles

If you love Nonfiction, you’ll love:
Rocket to the Moon: Big Ideas That Changed the World by Don Brown
Beavers: The Superpower Field Guides by Rachel Poliquin
2020 National Geographic Almanac
The Thrifty Guide to the American Revolution by Jonathan W. Stokes
Weird But True! Greek Mythology by Sarah Wassner Flynn

Fifth-graders may enjoy:
Bridge to Terabithia by Katherine Paterson
The Girl Who Drank the Moon by Kelly Barnhill
Brown Girl Dreaming by Jacqueline Woodson
New Kid by Jenny Craft
Island of the Blue Dolphins by Scott O’Dell
The Phantom Tollbooth by Norton Juster
In the Year of the Boar and Jackie Robinson by Bette Bao Lord
The Sign of the Beaver by Elizabeth George
The Trumpet of the Swan by E.B. White
A Wrinkle in Time by Madeleine L’Engle
Full Cicada Moon by Marilyn Hilton
The Wheel on the School by Meindert DeJong
The Mysterious Benedict Society by Trenton Lee Stewart
Hello, Universe by Erin Entrada Kelly
When You Reach Me by Rebecca Stead
The Secret Garden by Frances Hodgson Burnett
A Little Princess by Frances Hodgson Burnett
Greenglass House by Kate Milford
The Secret of Platform 13 by Eva Ibbotson
Ophelia and the Mysterious Boy by Karen Foxlee

Sixth-graders may enjoy:
Black Brother, Black Brother by Jewell Parker Rhodes
Front Desk and Three Keys by Kelly Yang
A Long Walk to Water by Linda Sue Park
Out of My Mind by by Sharon M. Draper
Salt to the Sea (Septys)
The Miraculous Journey of Edward Tulane (DiCamillo)
Ghost (Reynolds)
The Parker Inheritance (Johnson)
The Higher Power of Lucky (Patron)
The Watsons Go to Birmingham-1963 (Curtis)
Insignificant Events in the Life of a Cactus (Bowling)
The Inquisitor’s Tale (Gidwitz)
A Tale Dark and Grimm (Gidwitz)
The Crossover (Alexander)
Chasing Vermeer (Balliet)
Wednesday Wars (Schmidt)
Matched (Condie)
The Penderwicks (Birdsall)
The Ocean at the End of the Lane (Gaiman)
Hatchet (Paulsen)

Seventh graders may enjoy:
Postcards from No Man’s Land (Chambers)
The List of Things That Will Not Change (Stead)
The Evolution of Calpurnia Tate (Kelly)
Norse Mythology (Gaiman)
Dead End in Norvelt (Gantos)
The Hate U Give (Thomas)
The Shadow Society (Rutkoski)
Monster (Myers)
New Kid (Craft)
Greenglass House (Milford)
A Wizard of Earthsea (LeGuin)
The Wrinkle in Time quintet (L’Engle)
Refugee (Gratz)
A Monster Calls (Ness)
The House of the Scorpion (Farmer)

Looking for more ways to encourage reading at home, especially for your children who are just developing their reading skills? Check out Willow’s Early Literacy Development guide, written by Willow teachers, for lots of practical tips!

← Congratulations to the Class of 2021! Apply to Be Our New Alumni Society Coordinator! →